by BHS
Comments are off 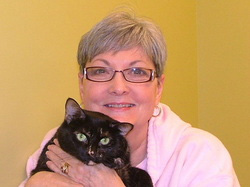 Jolene has been an invaluable asset to Burlington Humane since she first joined as a Feed and Clean volunteer in 1992.  Jolene joined the Board of Directors in 1993 as Fundraising Director, and in 1996 she became Director of Adoptions.  In 2001 she was elected President, a position she held for 15 years.  Some of Jolene’s duties as President included chairing board and executive meetings, enacting BHS by-laws and policies, collaborating with other directors, being available to staff and volunteers as necessary and assisting with fundraising. Jolene has stepped down as president but continues to volunteer as needed with all positions at BHS. Jolene lives in Burlington with her husband, Tim, and their two BHS cats, Sampson and Ellis.

“Many people wish they could find their “dream” job, but I feel I found mine – being able to work with animals.  Rescuing animals started at a very early age and continued at every stop on the way to Burlington! It has been an honour and a pleasure to lead BHS throughout the past 10 years and I am very proud to be a part of all our accomplishments. With an experienced Board of Directors that never leave a job unfinished, BHS will have certain success in the future”.

On Episode 32 of Burlington Humane, we talk with Dr. Chung Yeen Mac of Mac Animal Clinic about the a ...more

On Episode 30 of Burlington Humane, we talk with Burlington resident, Cindy Bond, about her new Serv ...more

Burlington Humane Podcast, Episode #29: Cats with FIV, Socializing your Puppy during Physical Distancing and Ode to a Rescue Pet.

Our Spring Auction is filled with incredible items with support from many donors and l ...more

We are proud members of