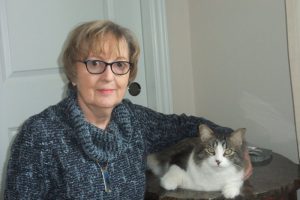 Patricia moved to Burlington in 1989 after a career in Europe and the USA. She has volunteered at Burlington Humane since 1993, first with the Pet Therapy program (team leader), as well as on reception and has also fostered animals from time to time. She joined the Board in 2001 as Fundraising Director and was instrumental in assisting with the Pooch Promenade for many years, as well as with many other fundraising events. In 2002 she became Secretary to the Board.

Patricia now lives in Grimsby with her husband. They have two Golden Doodles, Sam and Tuppence, and two cats, Mallow and Little Mog, all of whom were adopted from BHS.

“Animal welfare has always been an important issue to me, and I feel privileged to be a part of such a dedicated organization. Burlington Humane has made great progress within our community in so many ways with its various outreach programs such as pet therapy visits to nursing homes and retirement residences, as well as in providing education about responsible pet care. It continues to be a strong force to help animals in need, and I am honoured to be a part of the team.”

On Episode 34 of Burlington Humane, we talk with her worship, Marianne Meed Ward, Mayor of the City [...]

Burlington Humane Podcast, Episode #33: Animal Nutrition and Excerpts from the book, “Animals and our Emotional Wellbeing”

On Episode 33 of Burlington Humane, we talk with Robin Saar, RVT, VTS (nutrition) who is the Nationa[...]

We at BHS understand that letting your dog run and play is so important! But some dogs[...]